The idol of Ganesh symbolises how an ideal leader should be.

Puranas are symbolic literature and everything in them is metaphorical.

So what does an elephant headed God mean. 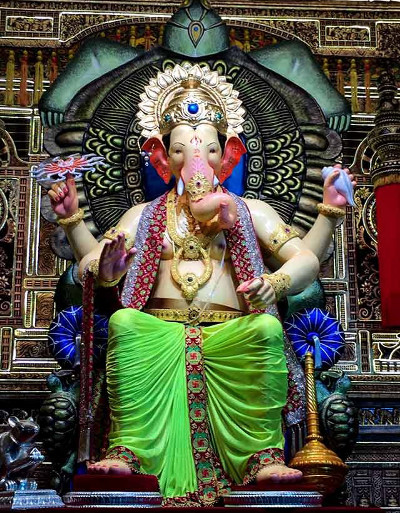 So let’s check the qualities of an elephant:

First have you ever seen and elephant when he eats. Using his trunk, before eating, he throws the food around, this symbolizes his generosity. Thousands of insects and other small living beings get food when an elephant eats. A leader is generous at heart. He believes in his capability to earn, that’s the reason he is generous.

Then an elephant has large ears. They symbolize the fact that he listens to everyone, even a small person and whatever he listens , he stores it in his stomach and does not let out. That’s why he has a bulky stomach and called ‘Lambodar’. Thus a leader hears everyone and is approachable. People have faith in the leader that whatever they say to him would not be used against them.

The eyes are tiny compared to the head. They symbolize  far-sightedness and minute observation.
Every step taken by a leader is after minute observation and takes care that even the smallest person is not left out.

Elephant has good memory and ability to remember for long time. This helps him to take better decisions.
An elephant is believed to have ability to see a person’s inner personality and future. In ancient times, to choose an heir for a kingdom whose King did not have any offspring, an elephant was given a garland in trunk. The person whom that elephant garlanded was chosen as the heir.
So a leader should have a long sight and work towards achieving it, instead of fulfilling the current needs that are perceived to solve an issue. A leader should know clearly where he is drawing everyone towards and should not get dragged by the followers’ short impulses.

He walks slowly but the steps are firm.

The elephant headed Ganesh has two tusks : one full and one broken. The broken one is of wisdom, and the whole is of faith. So until the time we are able to gauge /get the proof of a fact due to limited wisdom, it is the whole belief or faith that helps us carry the work. So a leader should imbibe a faith in his decisions. People may be unable to perceive the full picture that a leader has, due to their limited wisdom, but a faith in leader and his decision will get the work done.

At last the vehicle of our Lord Ganesh is a mouse.
Have you ever been bitten by a mouse? A person bitten by a mouse does not come to know when the mouse has bitten at night, until the next morning. The mouse blows air while nibbling and hence we do not sense while it’s biting. In this sense mouse is symbolic of ‘maayaa’ or illusion.
Think about all the decisions/resolutions that were made by you long time back. Have you steered in that direction or just branched of to a separate direction altogether? Are you there yet? This is the affect of ‘maayaa’. It just nibbles off time and energy and you realize it only after a while not while at it. But Ganesh’s vehicle is mouse, i.e maayaa is under his control and he drives it, instead of the other way around.
This symbolizes that a leader should steer the direction and always be alert of any diversions.

Mouse is also a symbolic representation of a petty animal. But Ganesh has it as his vehicle. This means however small a person may be, a leader knows how to pull out the best in him.

He is also called ‘Vighnaharta/dukhharta’ which means reliever of all obstacles/unhappiness.
This doesn’t mean that he removes obstacles or unhappiness, in fact they would be part of life as they are inevitable.
It is just that a good leader changes the perspective to look at obstacles that generate unhappiness. He imbibes a positive attitude so that instead of running away from obstacles, we face them with sincere efforts, hence they don’t seem to be obstacle any more.

Overall Lord Ganesha is a symbolic form of Ideal Leader.

So while looking at the Ganesh idol let us relate to these qualities and try to bring these in our life.

(note: to keep the writing concise and readable, only he/him is used, consider it gender neutral)

— These are not my thoughts, but acquired by being in contact with great people and an idea of a great philosopher.

View all posts by squeezedthoughts